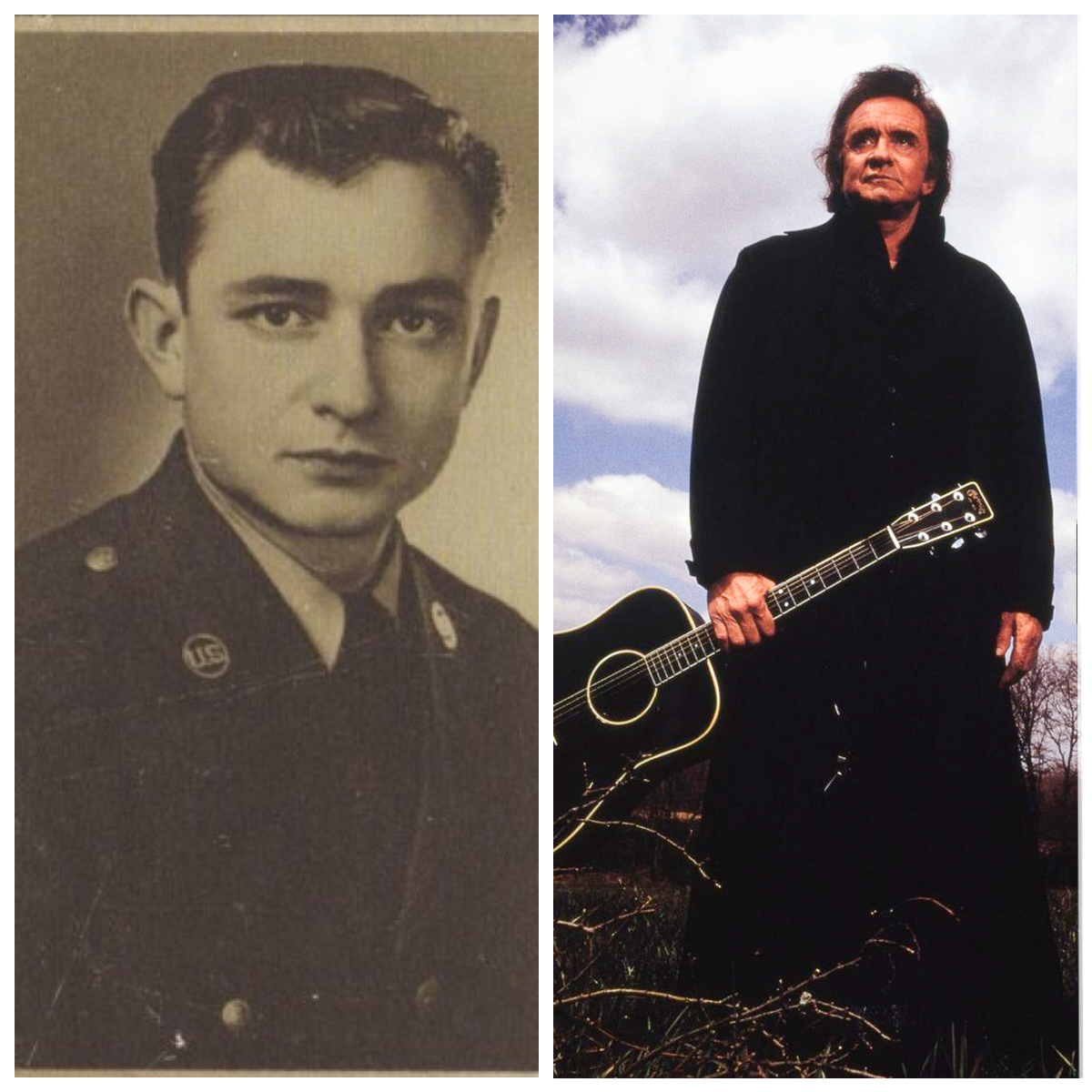 Yes, before he was famous for singing, Folsom Prison Blues, he wore blue and was Airman Cash in the United States Air Force.

J.R. Cash enlisted in the United States Air Force after he tried working on an assembly line at an automobile manufacturer and found it really wasn’t for him.

When he went to sign up, he put his name down, J.R. Cash, but the recruiter told him that the United States government needed a name, not just initials.

His mother wanted to name him John after her father, John Rivers, but Ray Cash wanted to name the boy after himself.  Since they couldn’t agree they went with J.R. Cash, but on that day at the recruitment office, J.R. Cash became John R. Cash.

Little did we know but this new recruit would be a top-notch code cracker working for the USAF in Landsberg, Germany.  While monitoring the Soviet Morse Code chatter on March 5th, Johnny Cash became the very first American to hear of the death of Joseph Stalin. Naturally, this is not something he could tell anyone for some time, but history tells us that he was indeed the first one to hear the news of the Soviet leader’s death.

So why do I mention all of this?

Johnny Cash was a vet before he was a singing sensation.  He served the United States during the 50s and did so in the Security Service unit.  He couldn’t even talk about much of his work with his own buddies in the Air Force because of his job was so secretive.  He likened it to being in jail at times, feeling alone and going crazy.  Even his off-base liberties were severely limited due to his level of clearance.

While continuing to research more about Johnny Cash for my show, He Wore Black, I found a great blog post by Major Van Harl USAF Ret. called, “The Man In Blue: Johnny Cash”.  I have received permission from the Major to use this article for my blog, which I have included below.

The Man In Blue: Johnny Cash

John R. Cash died one year ago yesterday, 12 September 2003. Everyone knows him as Johnny Cash the great country and western singing legend. But what a lot of folks do not know, is Johnny Cash was a military veteran before he was a country singing star.

Before he was the “Man in Black,” Airman Cash was the Man in Blue–Air Force Blue. He was born in 1932 in Kingsland, Arkansas and grew up on the family farm. He finished high school in 1950 just in time for the Korean War. While most young men waited for the Army to draft them for two years of service, Johnny Cash joined the Air Force for four years.

He trained in Texas, where he met his first wife and then shipped out to Landsberg, Bavaria, Germany. He spent most of his Air Force enlistment in Germany. Cash was a Morse code intercept operator with the USAF Security Service. This meant he was listening to radio signals generated by people on the other side of the “Iron Curtain.” There is a positive correlation in the abilities of people who work with signal codes and music.

Apparently, Mr. Cash had a strong natural ability in both areas. He came from a family with a musical background, but was extremely poor and buying musical instruments was low on the priority of needs. He was able to purchase his first guitar at the Base Exchange while stationed in Germany, using his military pay.

I remember hearing an interview of Mr. Cash, talking about the fact that his military pay, regardless of how little Airman’s pay was back then, was the first real money he had. The guitar was most assuredly a luxury he could never afford back home, as the son of an Arkansas sharecropper.

He formed his first band while in the Air Force, called the Landsberg Barbarians. It was made up of his fellow Airmen. He entertained GIs as well as the local Germans. The difference was that, unlike Private Elvis Presley, Airman Johnny Case was not already a famous singer while stationed in Europe.

After teaching himself to play the guitar in the Air Force he started writing music. He served in the Air Force until 1954, when he returned to Texas to marry his wife and eventually moved to Memphis, Tenn.

Now a civilian, Johnny Cash used his G.I. Bill benefits to attend a radio-announcing course at a broadcasting school in Memphis. When you look at his singing career from the 1960s through the 1990s you don’t think of Johnny Cash as a veteran. His “Man in Black” image, partly came out of his feelings for the Vietnam War. However I discovered that Mr. Cash toured Vietnam for the U.S. State Department and performed for the troops.

His hard living, alleged drug and alcohol abuse, and run-ins with the law did not set well with some in the Veteran community. But that was his life after serving his country.

I can remember being on leave with my career Navy father, headed home to Iowa when I was in grade school. It was a long drive from where we were stationed in Idaho and we listened to Johnny Cash on the radio singing “Five Feet high and rising.” All that summer, much to the chagrin of my family, I ran around singing “how highs the water mama, how highs the water papa.” I couldn’t remember the rest of the words.

It was on the front lawn of veteran Johnny Cash’s home that a young Captain named Kris Kristofferson landed, in an Army helicopter. He presented himself as a songwriter to Mr. Cash. After Captain Kristofferson left the service it was veteran Cash who helped launch the music career of veteran Kristofferson.

Veterans helping veterans in the entertainment industry is becoming a thing of the past. The main reason is there are so few veterans in the music, TV and motion picture business. Even with all the patriotic music coming out since 11 September 2001, most of it is written and sung about veterans, not by veterans. While it is wonderful music and great performances, I still have to stop and remind myself these performers have not “been there.”

The entertainment industry and the country music world lost a great performer one year ago. They, however, are not the only ones who felt a loss. The veterans of this great country lost one of their own. Former Airman Johnny Cash is gone, but I can assure you this is one veteran who will not be forgotten. “We buried another veteran today–it seems all my life it happens this way.”

I liked that line, is stuck with me after I read it.

But one thing had me curious, that last line, it was in quotes, but who said it?  The Major doesn’t provide any detail about that quote in the last line, “We buried another veteran today–it seems all my life it happens this way.”  Well, I think it is well worth mentioning, this is a line from a poem written by the Major.  Something I think everyone should read.  If you are like me, you won’t get past the first few lines before tears begin to well up inside.

We buried another veteran today

Personally, I think if Cash had read it, he would have been as moved as any.  And who knows, maybe even a new Cash tune would have been born when he read those words penned by the heart and hand of another veteran.